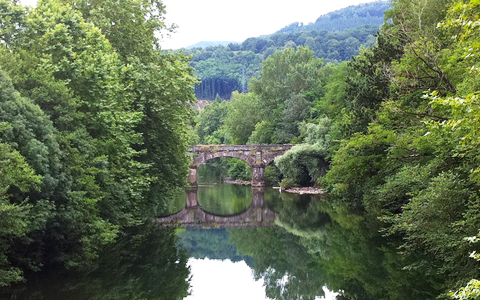 The Bidasoa is a Basque – Navarre evoking the river border crossing to France Irun . Indeed its frontier character , along with his former railway line , are their peculiar identity.

The Greenway Bidasoa gets good part of the route of the train Txikito ( Elizondo – Irun ) and offers an unforgettable journey of 39 km by beautiful towns of Gipuzkoa and Navarre on the banks of Bidasoa .

” Sail ” next to Bidasoa river platform following an old train that brought Irun to Navarre is an experience that is more precious to spend an intricate geography dotted with villages and lush with lots of character and a rich cultural and gastronomic really awesome . From Elizondo to Irun by Doneztebe , Sunbilla , Lesaka and Bera .

Bidasoa Railroad , better known as ” Txikito Train ” was born in 1898 as a mining train between Irun and Endarlaza .

In the beginning mostly carrying minerals , but later the goods were many and varied : wood, coal, iron, even livestock.

In 1916 the line was extended to Elizondo and the service was opened to the public , becoming a passenger train linking Elizondo and Irun . This event was a great change in the lives of the residents of the area ” Batzan Bidasoa ” through which flowed the train. But as happened to other trains of the time succumbed to the pressure of cars.

Another alternative route to traffic . Another opportunity for pedestrians and cyclists. And a strategic , hard runner , giving access to the sea following the course of river Bidasoa .

Bidasoa route is plotted within one of the leading axes of the European network of touring routes.

And not only the sea, the path is Bidasoa a door giving access to Europe and allow cyclists from around the world into the heart of our territory in a safe and appropriate manner.